After a glorious 8 months off I started back to work a couple weeks ago. It is nice to be back in the land of the employed but it sure makes dinners a little more complicated! 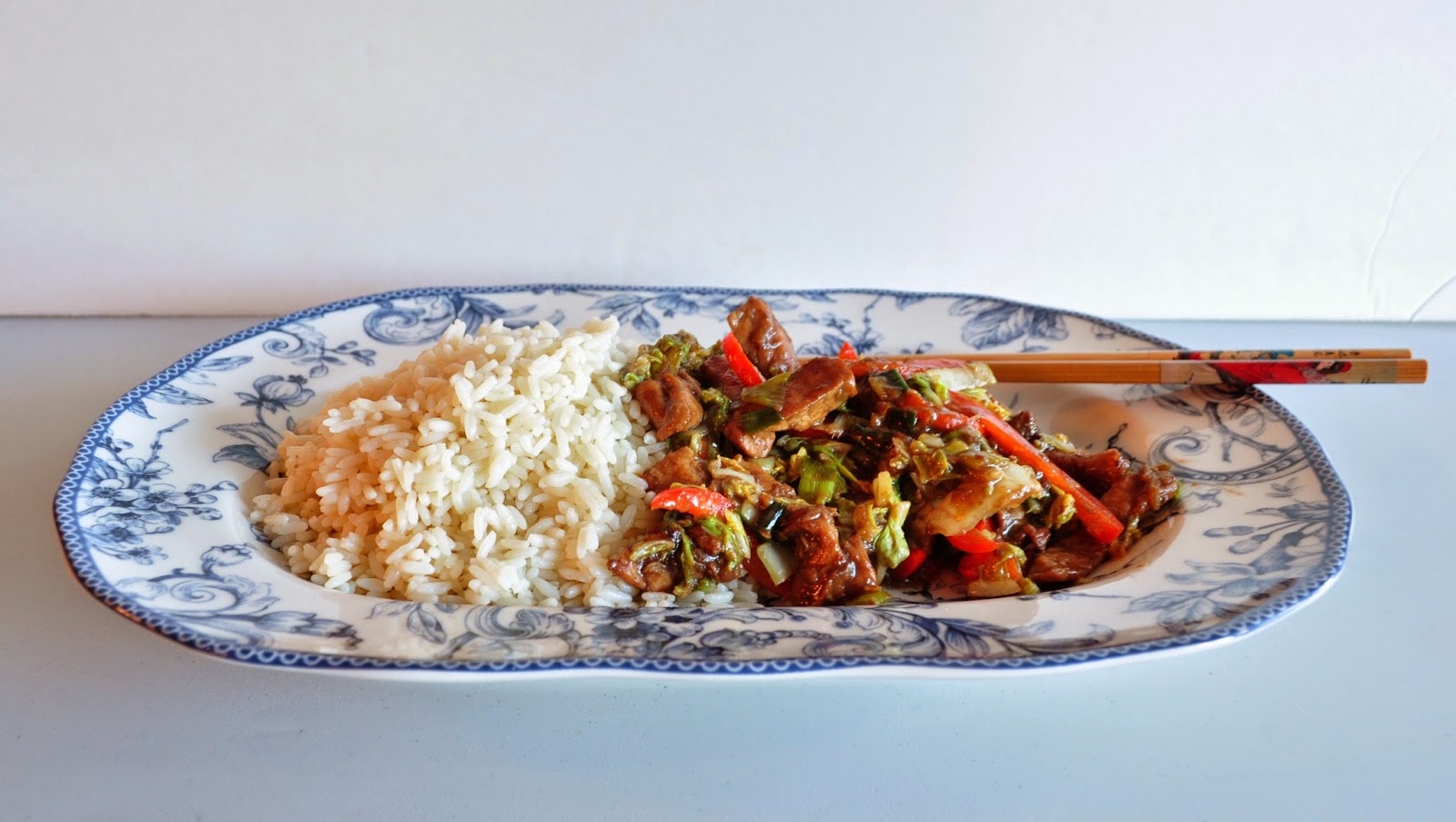 I get home a little later now, so I really want dinners that are fast but delicious.
This ginger pork and cabbage stir fry fit the bill perfectly. It has tons of flavors and cooks up in less than 30 minutes. 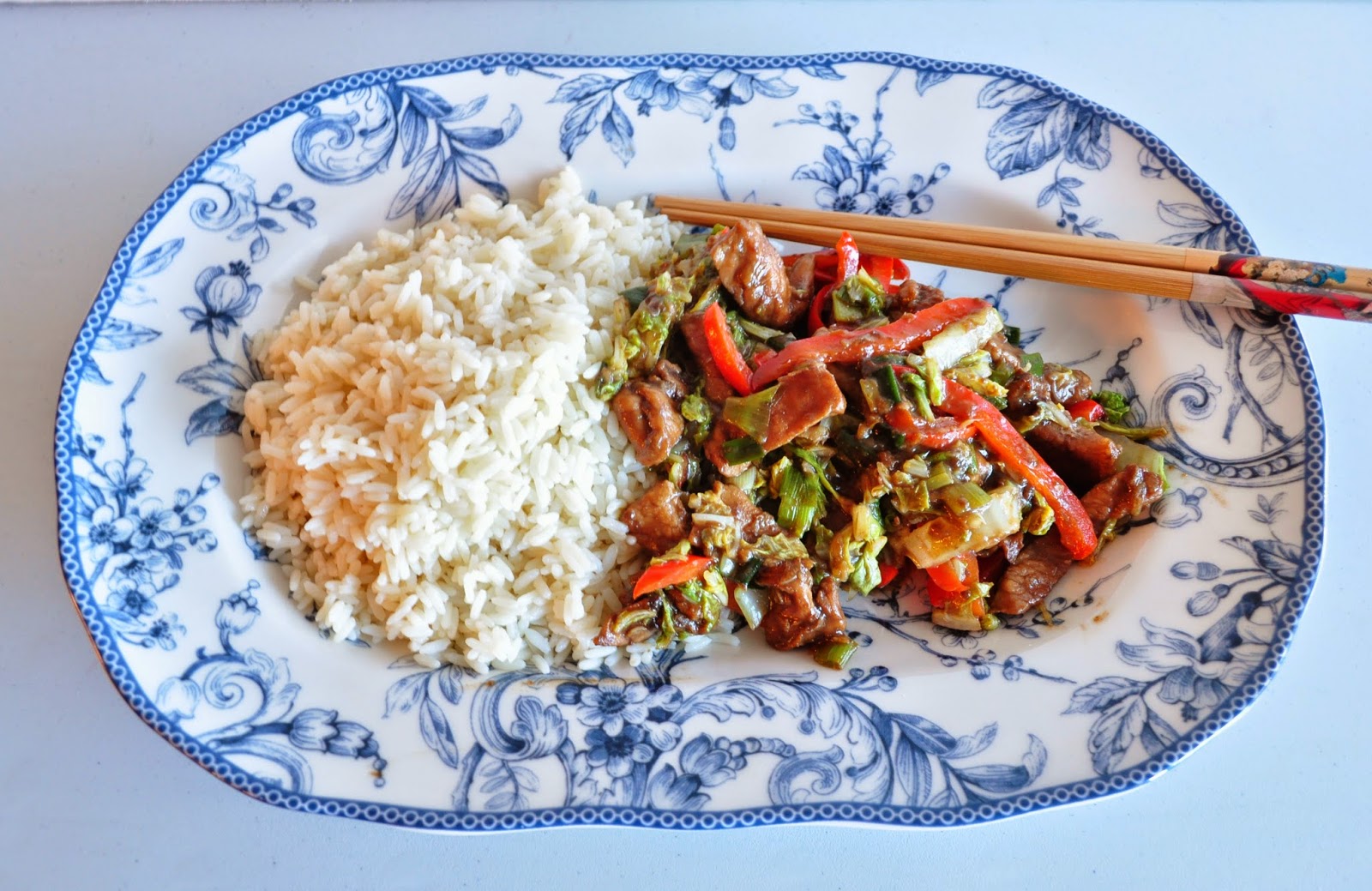 In a medium bowl whisk the soy sauce and cornstarch together until combined. Toss the pork in the sauce to coat evenly. Let it sit for 10 minutes.

In a large skillet heat the 1 tablespoon of oil over medium high heat. Add the garlic and ginger and cook for 1 minute or so until fragrant.

Add the pork to the pan in a single layer and cook for 2-3 minutes until browned and cooked through. Remove the pork from the pan to a bowl and set aside.

In the same skillet heat the remaining tablespoon of oil over medium high heat. Add the red pepper, cabbage and green onion, cook until tender crisp. Add the pork back to the pan with any accumulated juices. Heat everything for 1 minute or so until warmed through.

Serve the stir fry over your favourite rice! 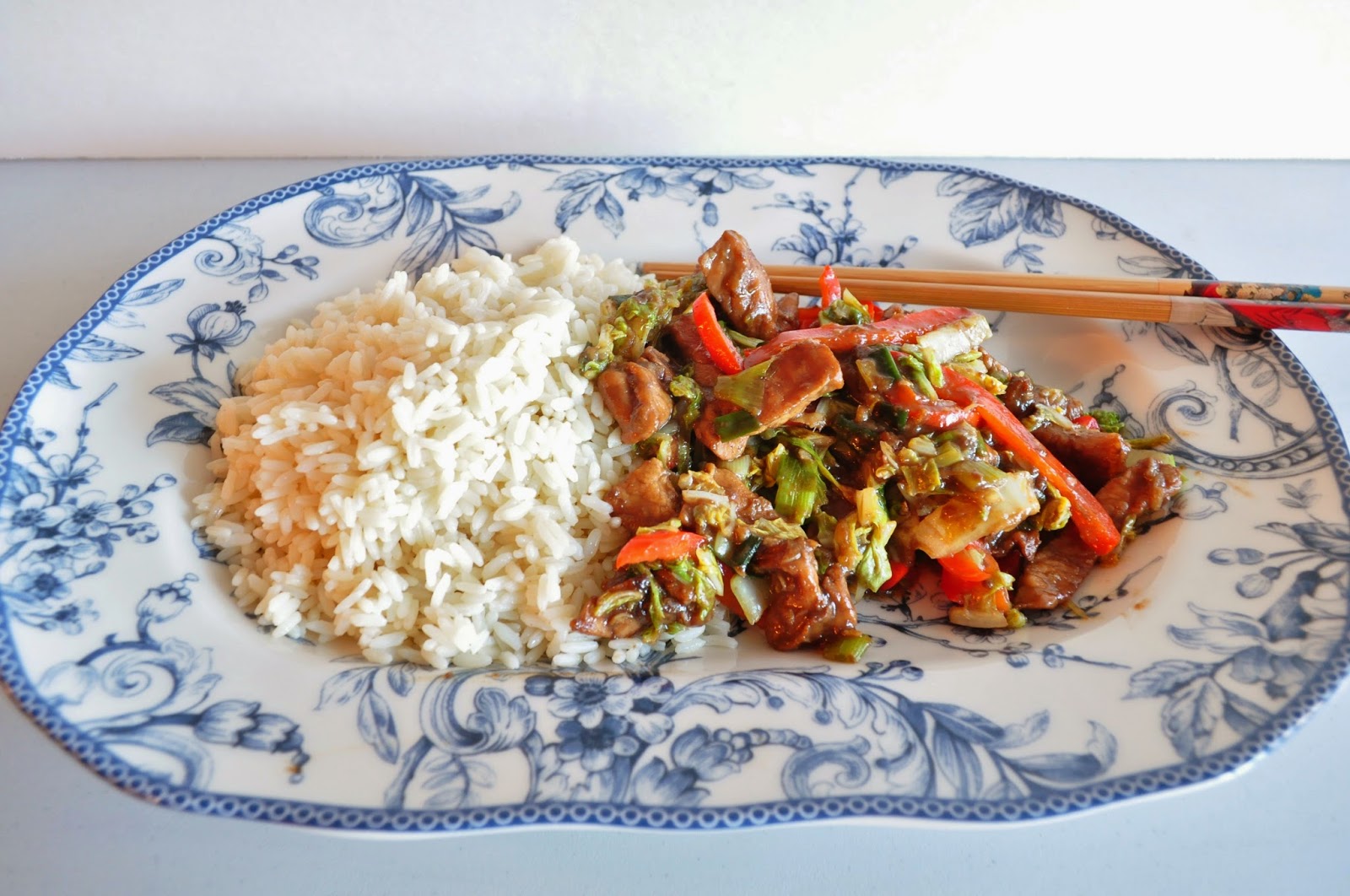 This pork stir fry was so incredibly quick and tasty. It was a perfect dinner for a rushed weeknight!

It made great left overs for lunch the next day as well!

Recipe adapted from Rachael Ray
Posted by Jen of My Tiny Oven at 7:19 PM No comments: Links to this post


What the heck is BPT pasta you ask?? Well I was planning to make a BLT pasta with spinach instead of lettuce, so I guess it would have been BST pasta, but when I took the bag of spinach out of my fridge it was totally rotten! I just bought it 2 days ago and it was fine. I was freaking out, no spinach now what? 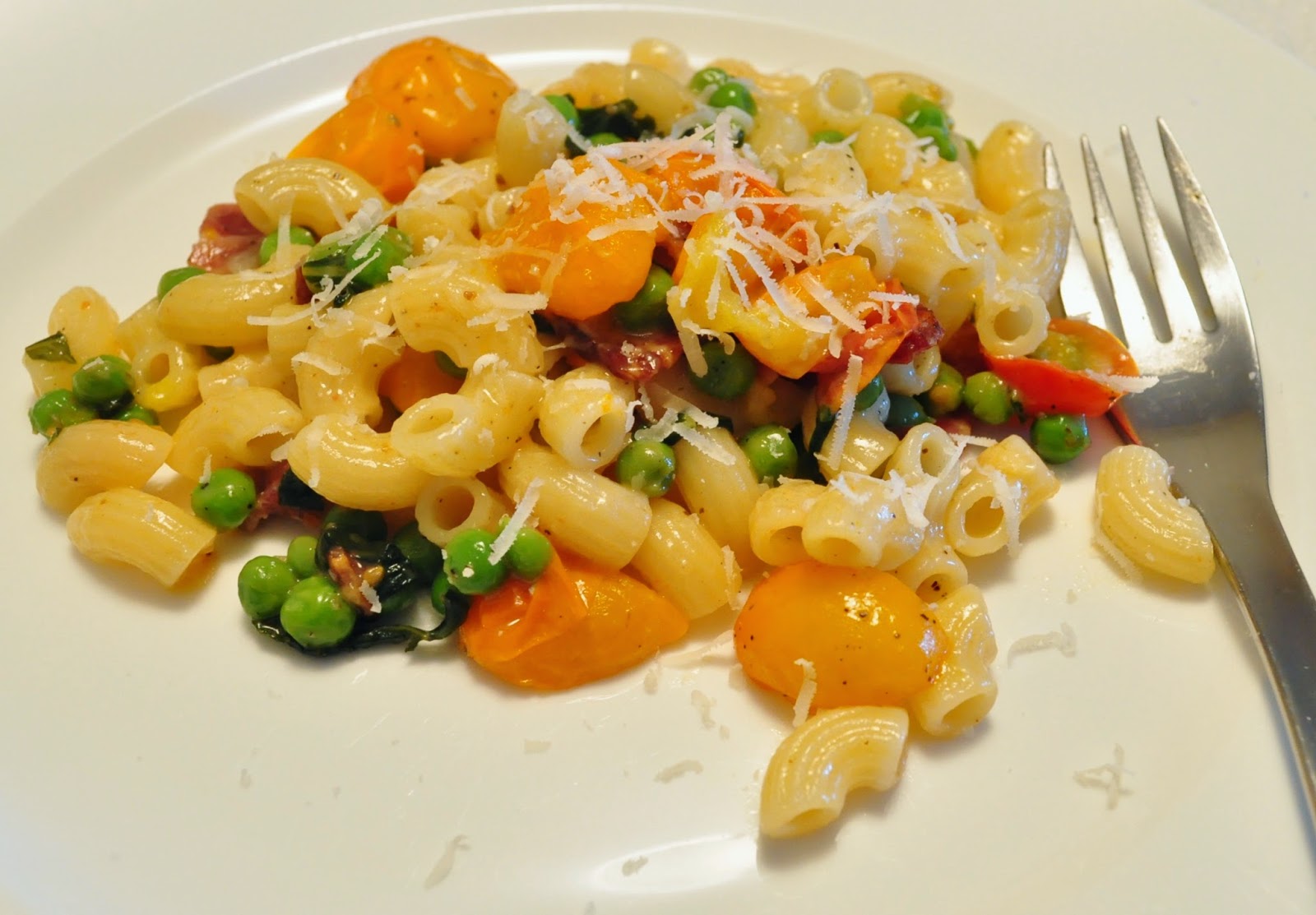 I had no other greens in my house expect frozen green peas, so that is how I got BPT pasta.  It turned out better than I expected. The sweet peas really paired nicely with the smokey crispy bacon and the salty Parmesan cheese. 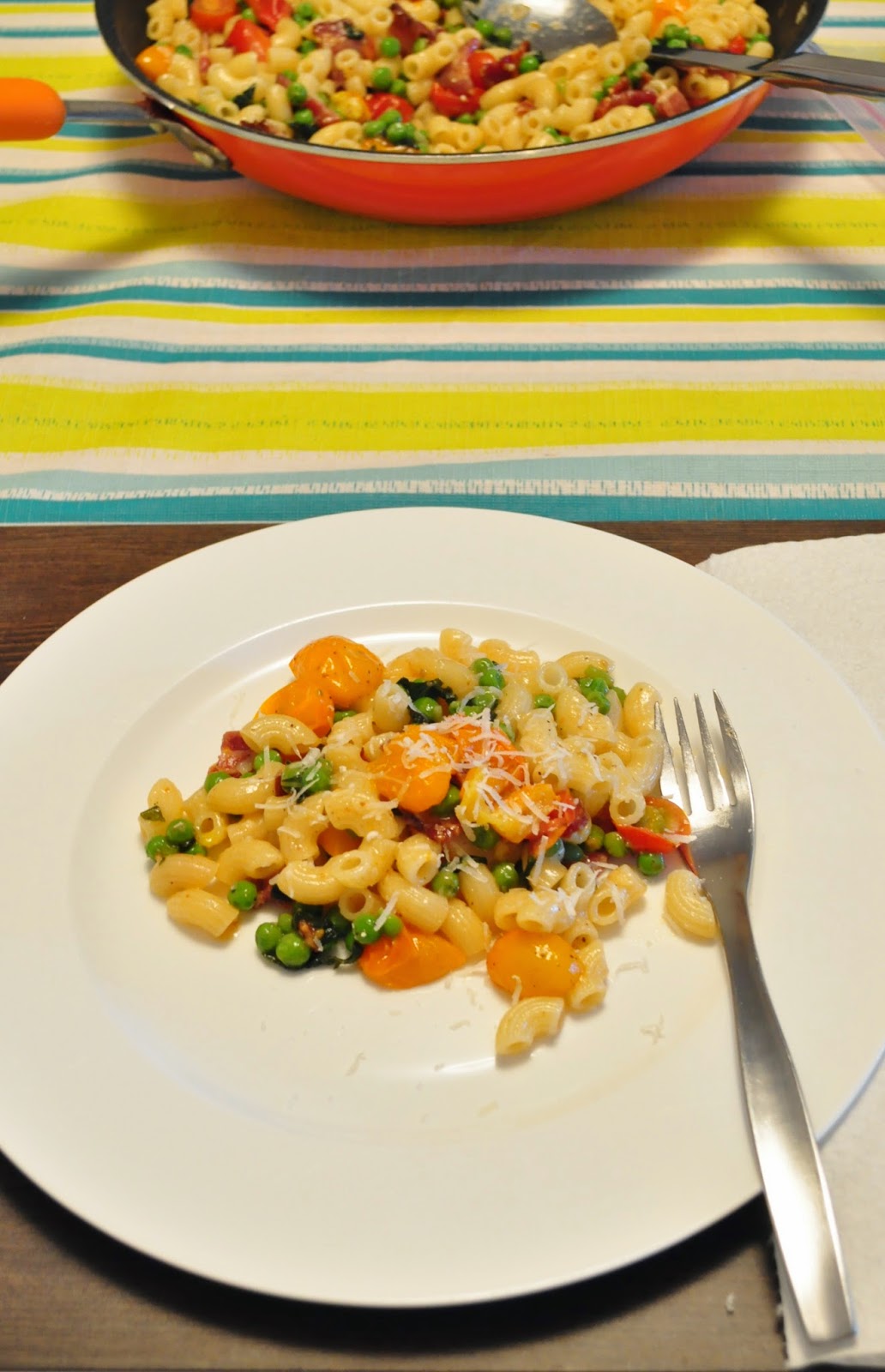 I guess if you just improvise, things tend to work out in the end!

In a large pot of salted boiling water cook the pasta according to package directions. Once it is tender drain, saving about ½ cup of the cooking water and set aside.

Meanwhile cook the bacon in a large skillet over medium heat until crisp. Remove the bacon from the pan and all but 1 tablespoon of the bacon grease. Chop the bacon into pieces and set aside. Toss in the garlic and cook for 1 minute until fragrant.
Add in the tomatoes and season well with salt and pepper. Cook for 4-5 minutes until the tomatoes begin to soften.
Toss in the frozen peas and the cooked pasta. Stir in the Parmesan cheese and bacon and a little of the pasta water, stir to coat.

Taste the pasta and adjust the seasonings as needed. I used a good amount of salt and pepper. If you wanted a little spice you could toss in a little red pepper flake.

Sprinkle on the basil and serve with a little more cheese! 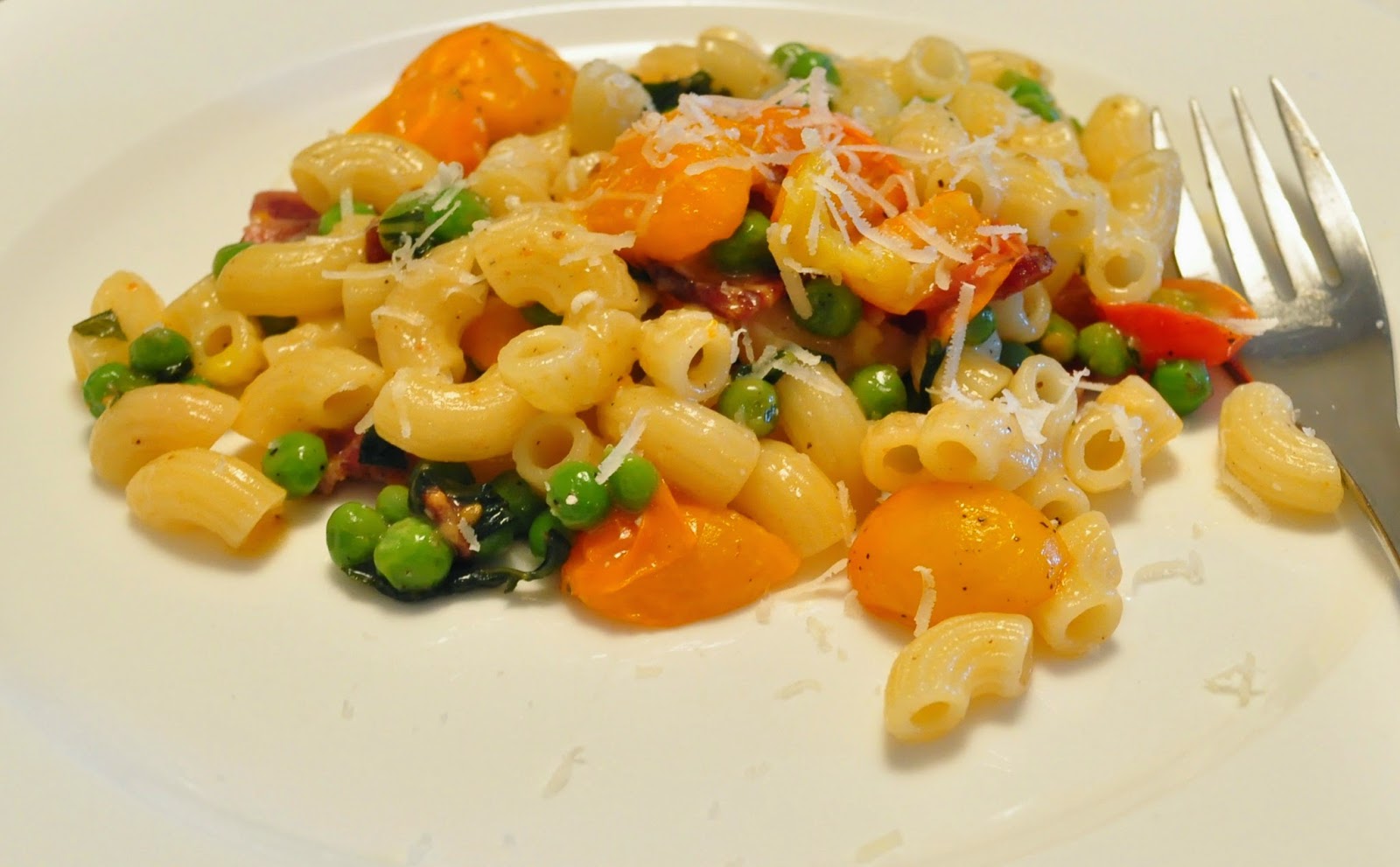 The peas were great but I am sure spinach would have been awesome too. You could even add zucchini or asparagus, really any green veggie would work.


This Farberware hand grater is the bomb! Do people still say that?? Sometimes I feel old. Sorry!
Anyway, this grater it is perfect for garlic, ginger and Parmesan cheese. 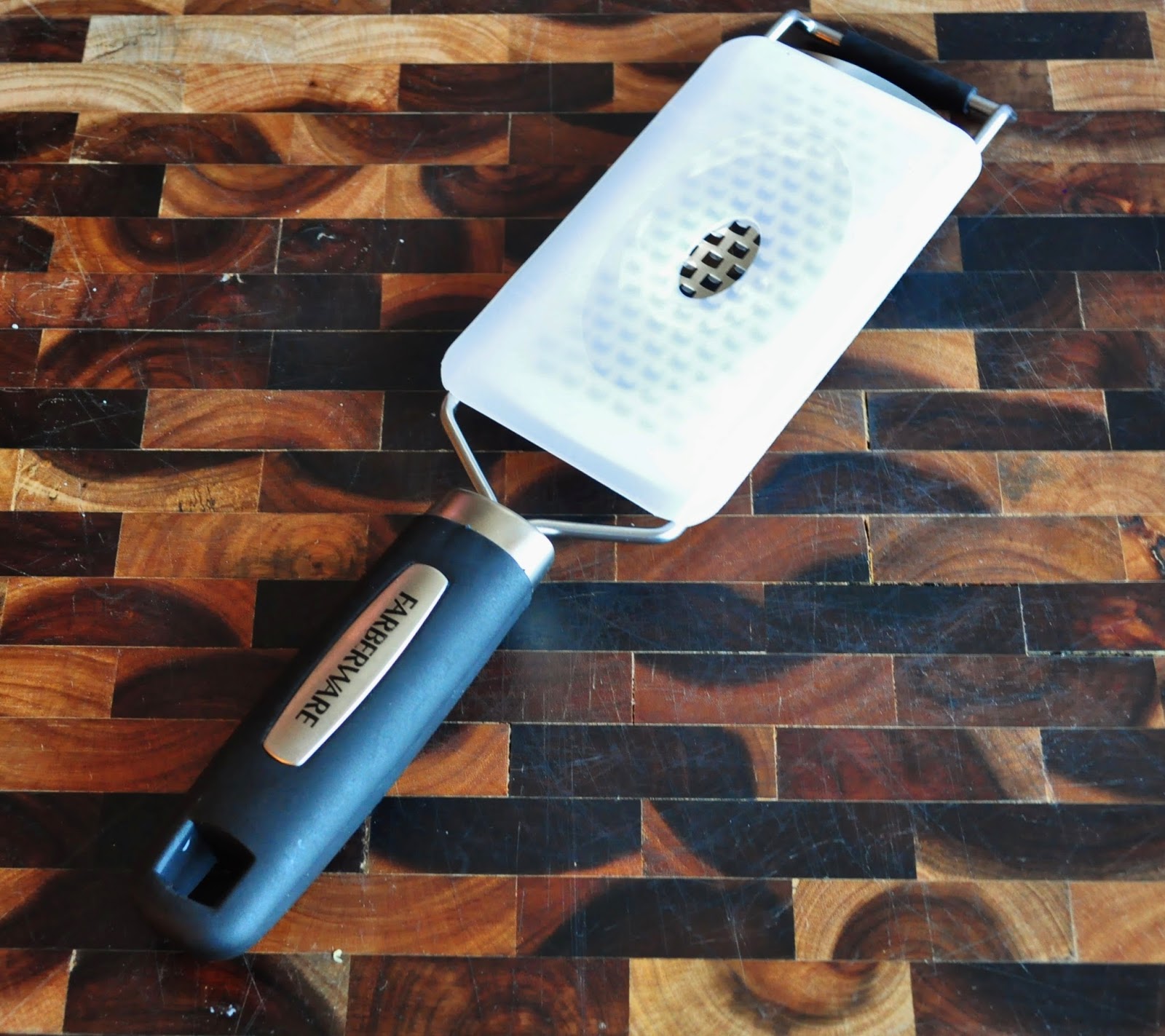 It is easy to hold and grate at the same time. Plus it rests on the counter with some space under it so you can also grate without holding it. 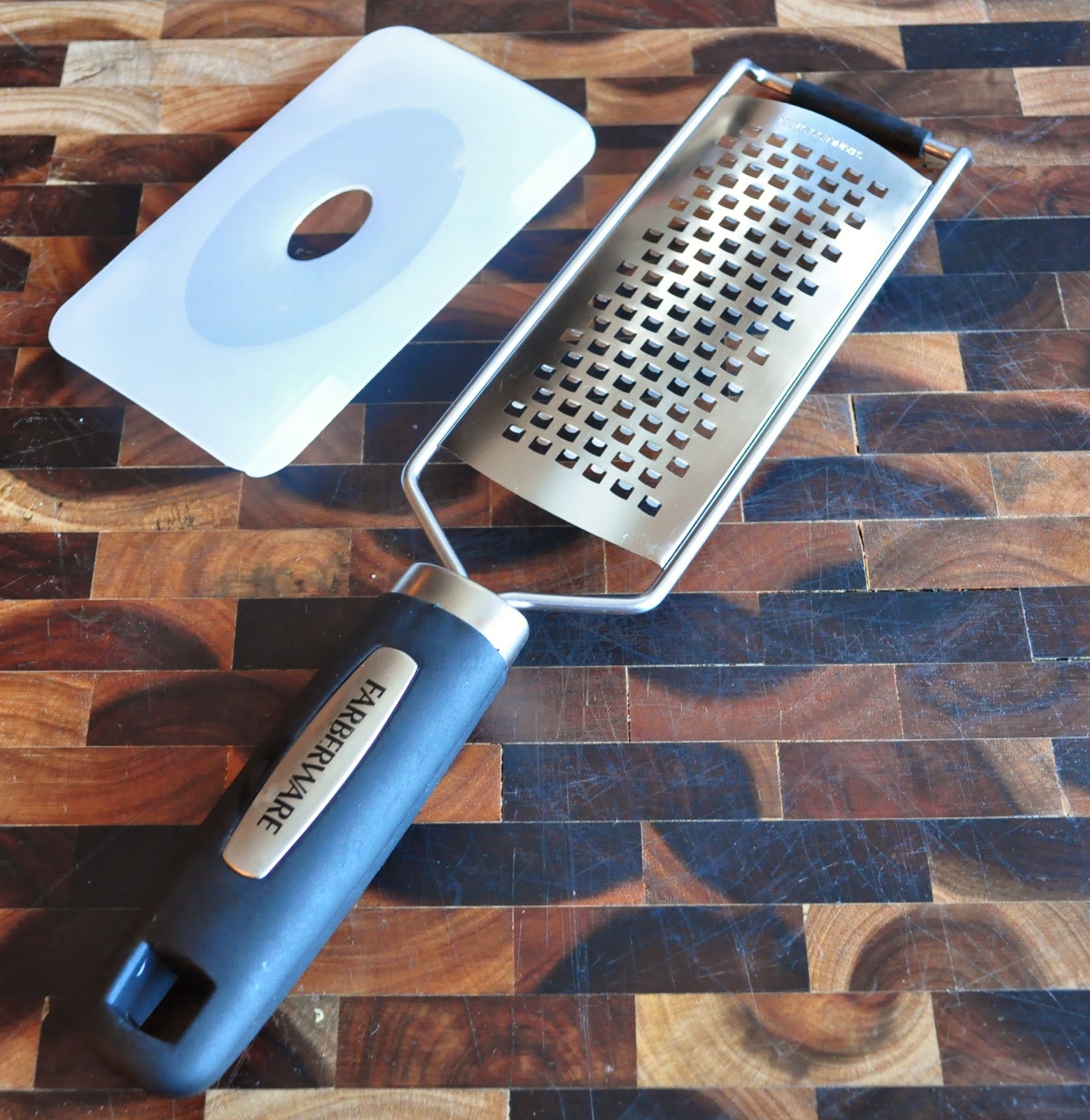 It is so sharp it grates very everything very easily.  The safety guard is great so you don’t reach into a drawer and grate your finger! 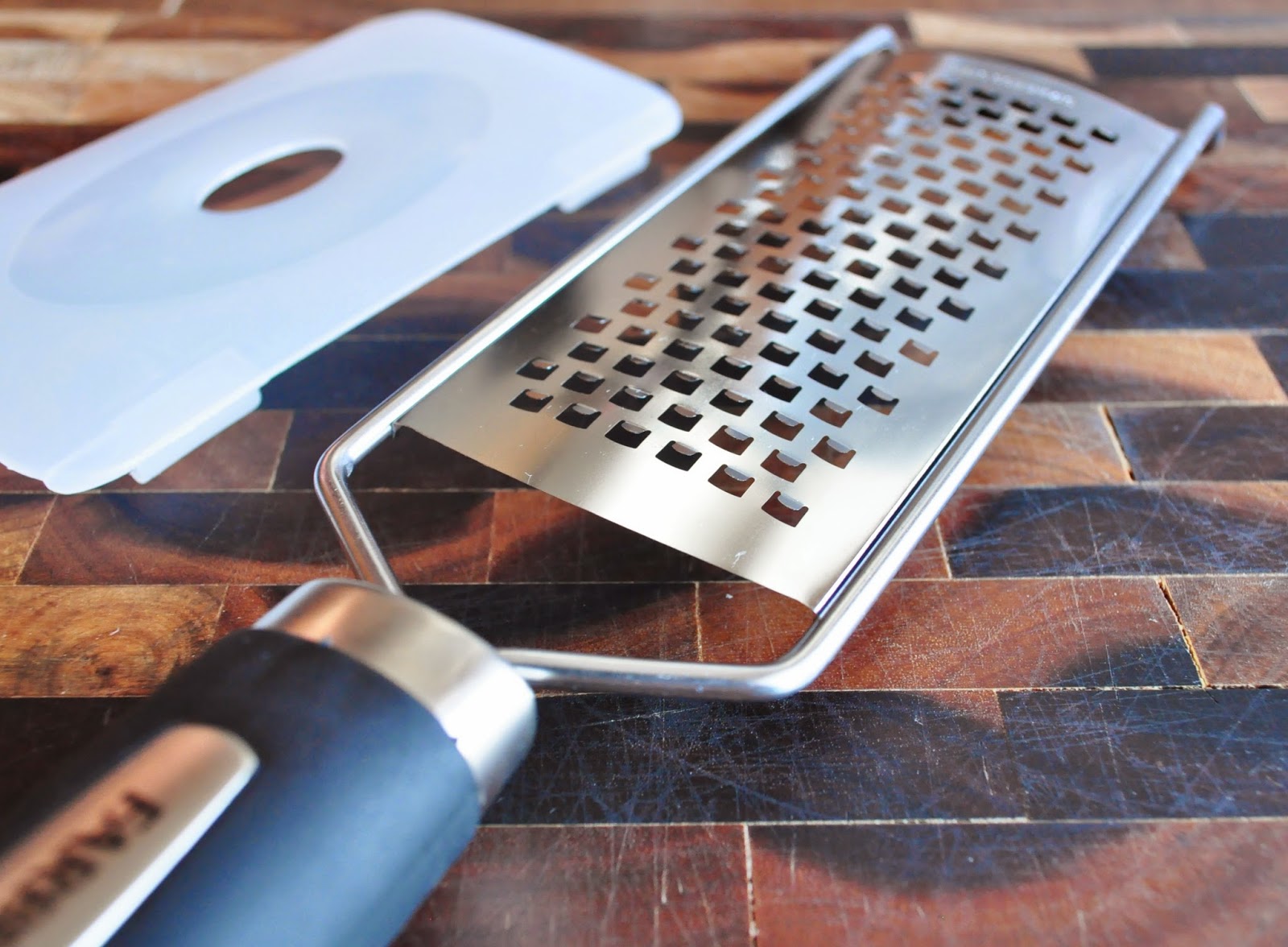 It is so much easier to clean that a garlic press or even a box grater.
I seriously use mine every single day! 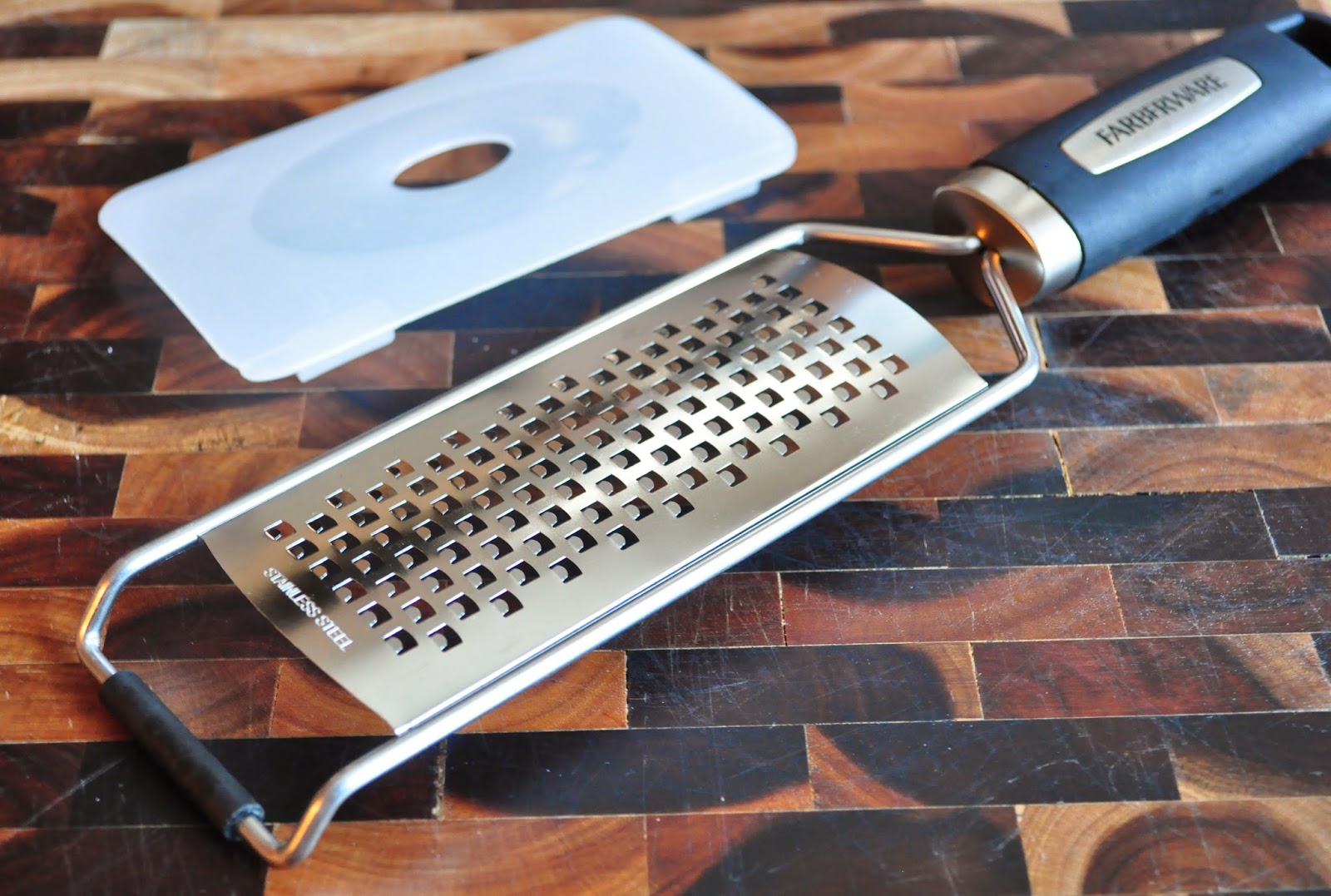 The best part is that it costs under $15. Such a great deal for such a great tool!
I would highly recommend adding one to your kitchen gadget collection.

I hope you all have a fabulous weekend!

Note: the Farberware people don’t have any idea who I am, I just love this grater!
Posted by Jen of My Tiny Oven at 7:00 AM 1 comment: Links to this post


My in house taste tester LOVES apple pie! I am still scared to make my own pie dough (I know I have issues!) so I decided to try something a little easier. 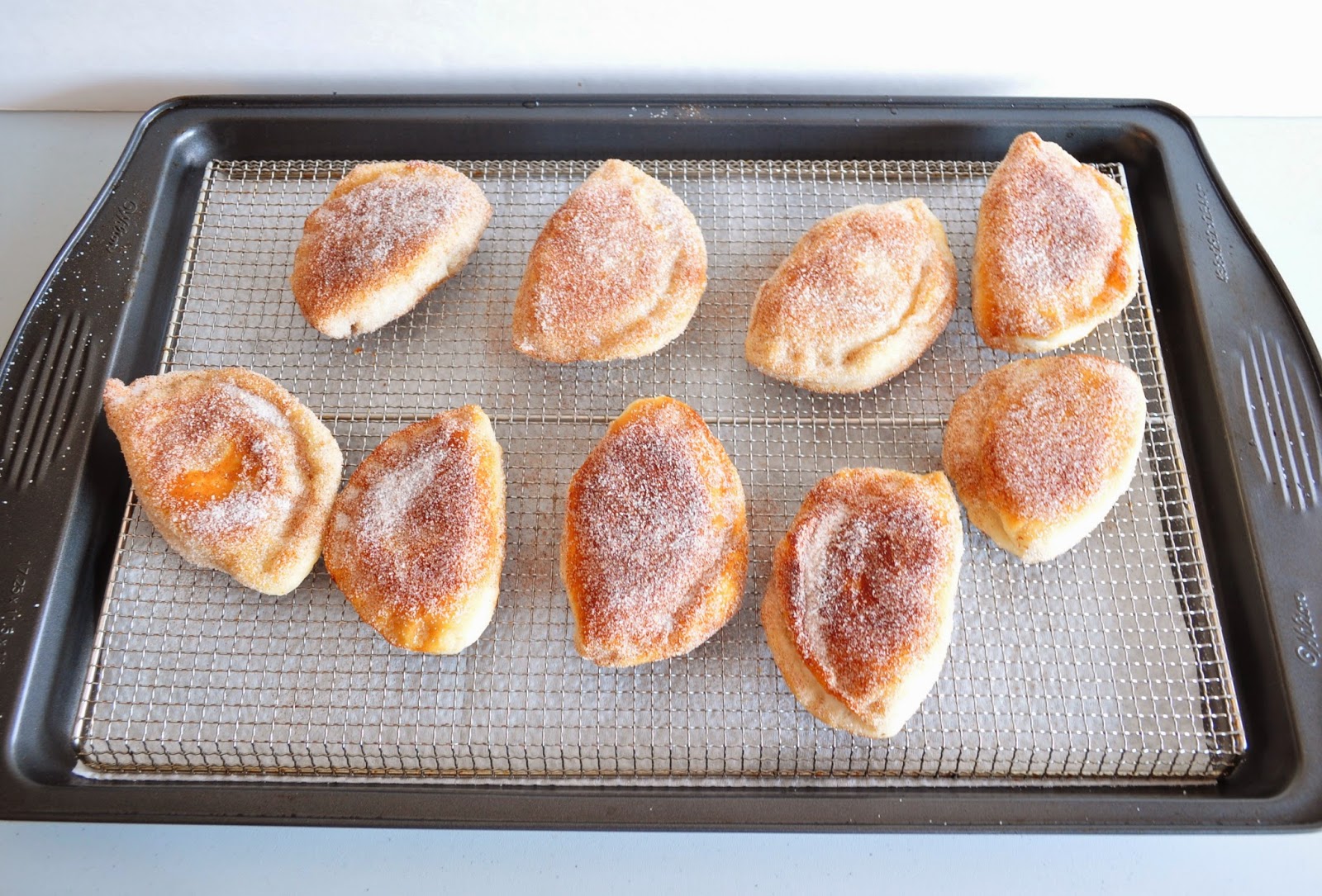 These fried pies are CRAZY good and dangerously easy.  A can of pie filling and some biscuit dough, that is way way too easy. 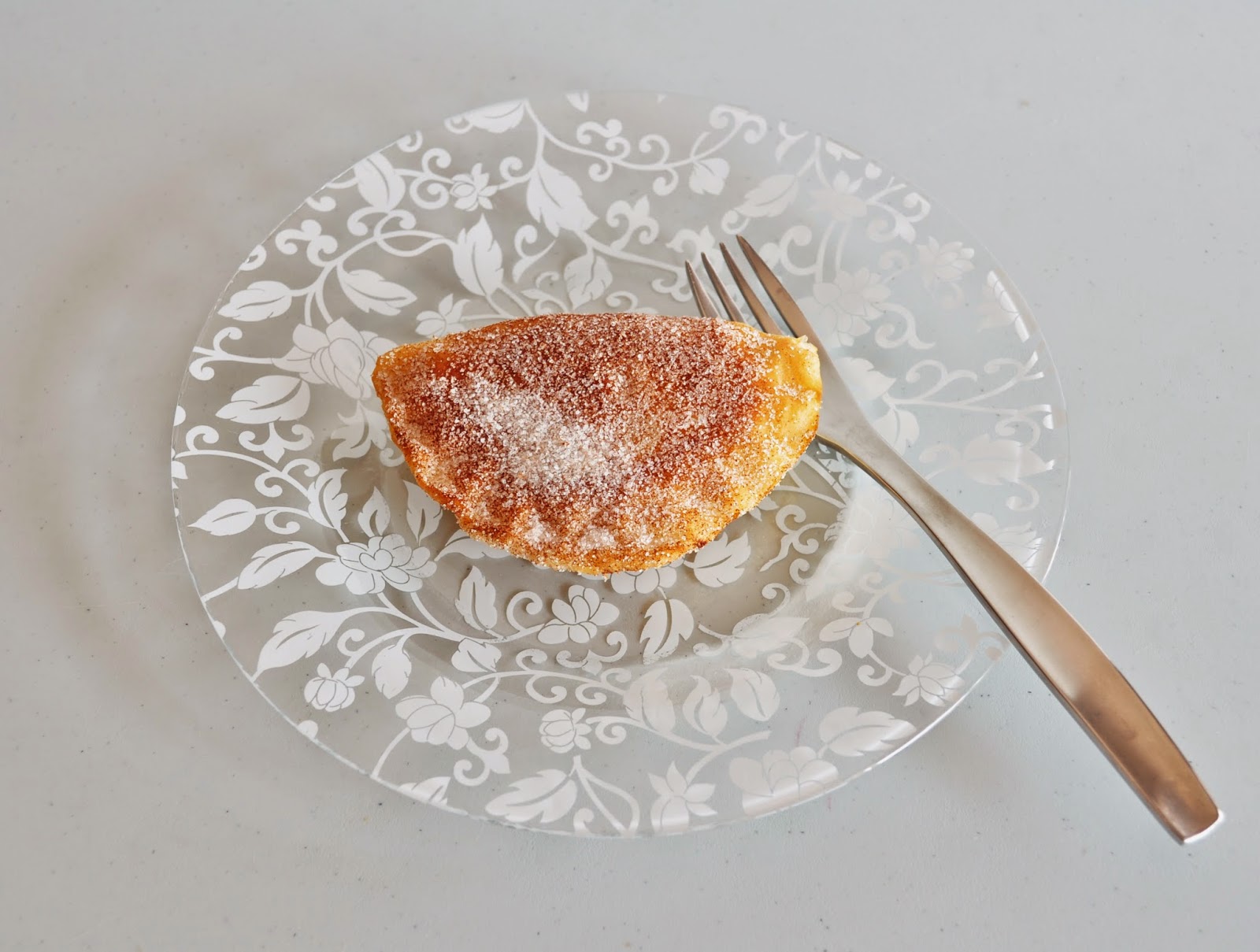 1 can Pillsbury biscuits (12 pack)
1 can apple pie filling (or any flavor you like, cherry is up next for me)
1 cup canola oil
½ cup granulated sugar
1 heaping tsp. ground cinnamon

Let the can of biscuit dough sit on the counter for 10 minutes.
Sprinkle a little flour onto the counter and roll each biscuit out to a 4-5 inch round. Place 2 teaspoons of pie filling in the centre of each dough round. Fold over to make a half moon shape. Crimp the edges of the dough really well with a fork to seal the pies up.

Once the pies are all ready, heat the oil in a pan over medium high heat to 325 degrees.

Fry 3-4 pies at a time. They brown up really quick so watch them close. You want to try to cook them at least 30 seconds per side so that the dough cooks all the way through. Adjust the heat as needed so the pies don’t brown too quickly.

Remove the pies to a wire rack over some paper towel to drain. Continue to fry the pies in batches until they are all cooked.

In a bowl stir together the sugar and cinnamon.
Carefully roll the fried pies around in the sugar until they are well coated. Place the pies back on the rack to cool. 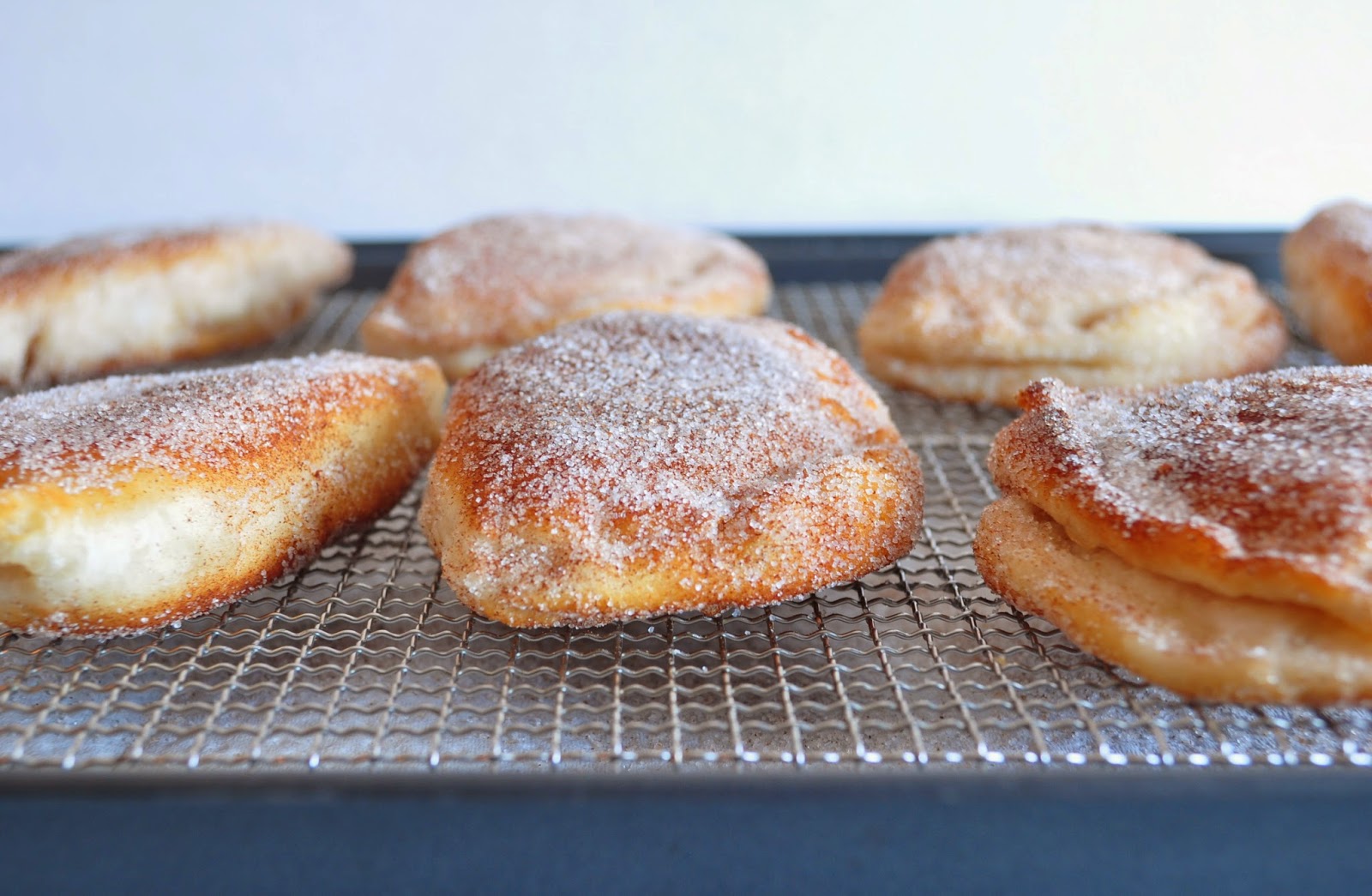 Go ahead and eat one as soon as you can, they are soooooooo good hot‼ They are really good cold too. I warmed up the left overs in the microwave for a few seconds and topped them with a scoop of vanilla ice cream! Now you really have some something‼ 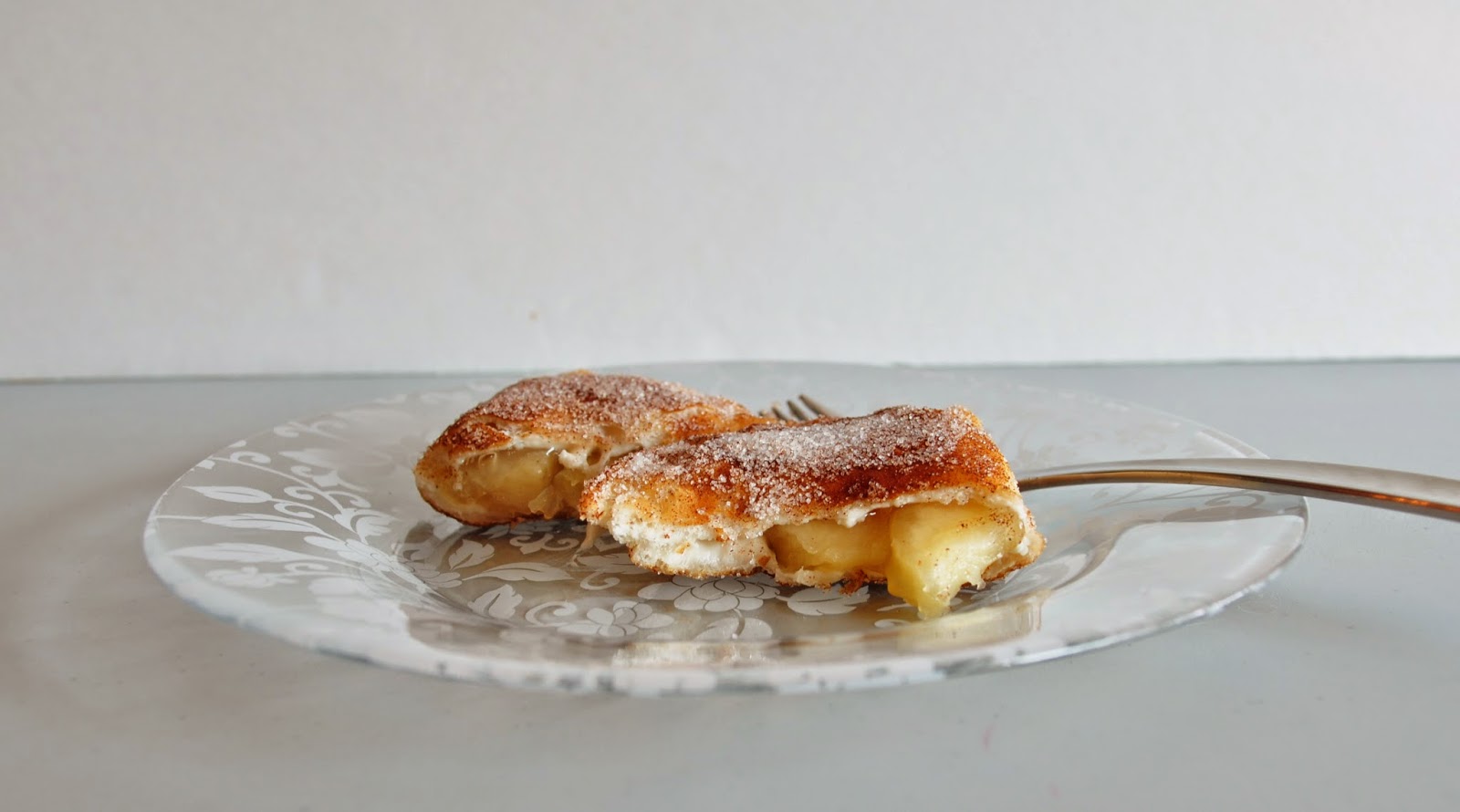 These pies got 2 thumbs up from my in house taste tester. They are so perfect! Any pie filling would be fabulous, even your favourite jam would be amazing!

Be warned they are dangerous!


The berries are so good right now. I have been eating them on everything from cereal to salad! 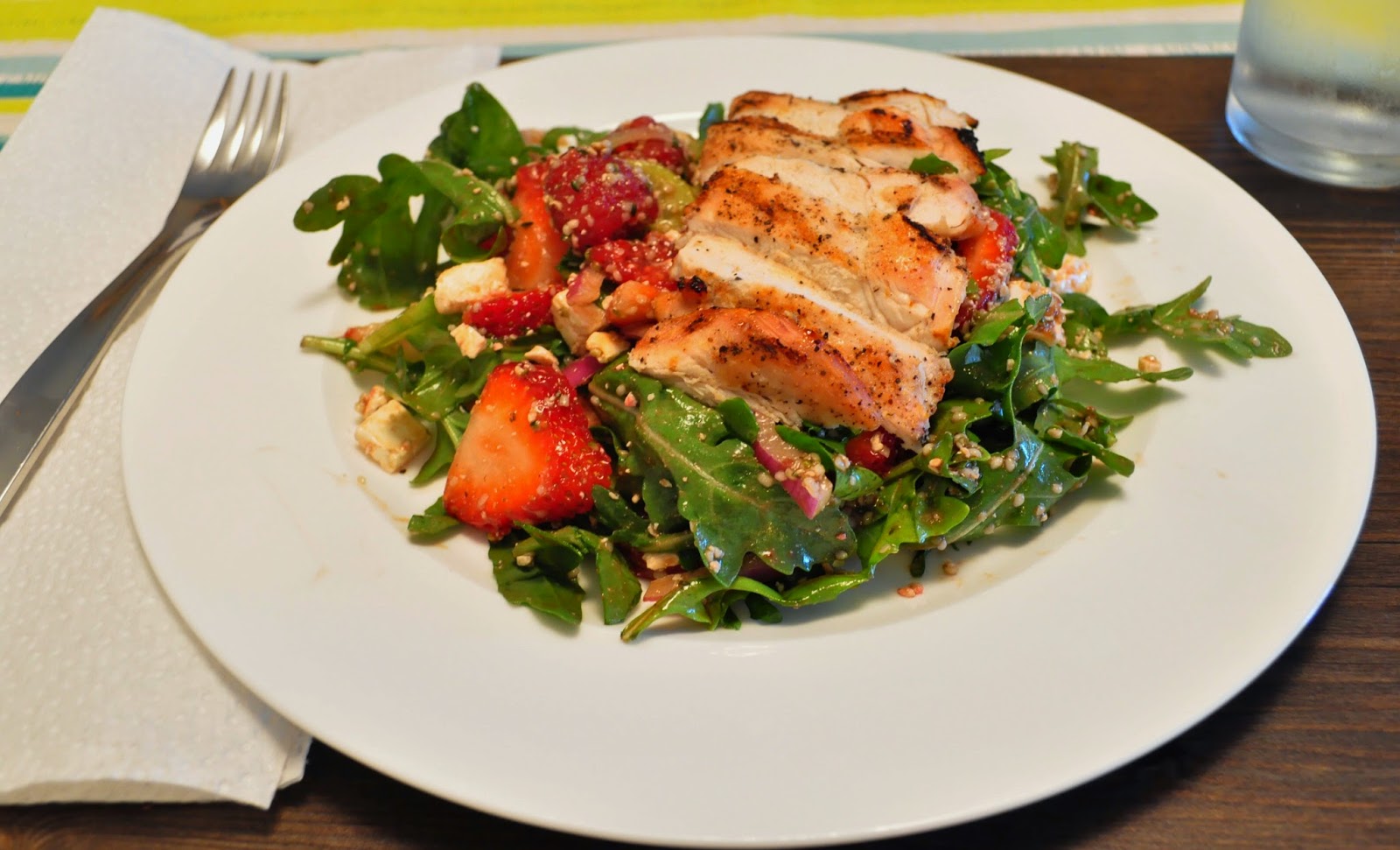 This salad is the perfect summer dinner. It is fresh and cool, it is salad perfection! 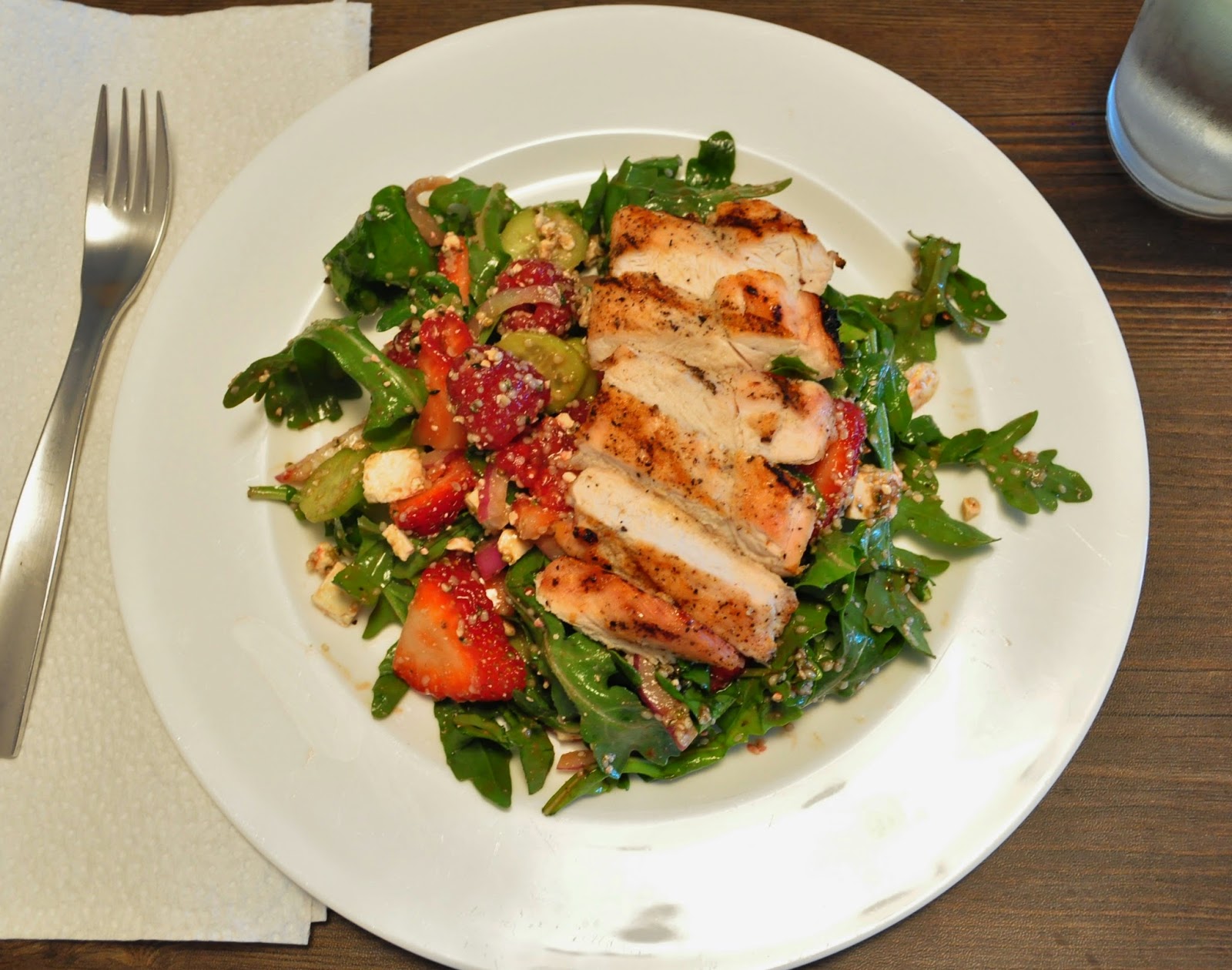 In a small jar, combine the olive oil, balsamic vinegar, garlic, Dijon and honey. Season the vinaigrette with salt and pepper to taste.
Shake the dressing well to combine.

Rub the chicken breasts with the olive oil and season well with salt and pepper. Place on a hot grill for 8-10 minutes until well browned and cooked through.
Remove the chicken from the grill and let it rest for 5 minutes before slicing.

In a large bowl combine the spinach and arugula, the strawberries, raspberries, cucumber and feta. Toss the salad with the dressing.
Sprinkle on the hemp hearts and top with the chicken.

You can use any remaining dressing to drizzle over the chicken. 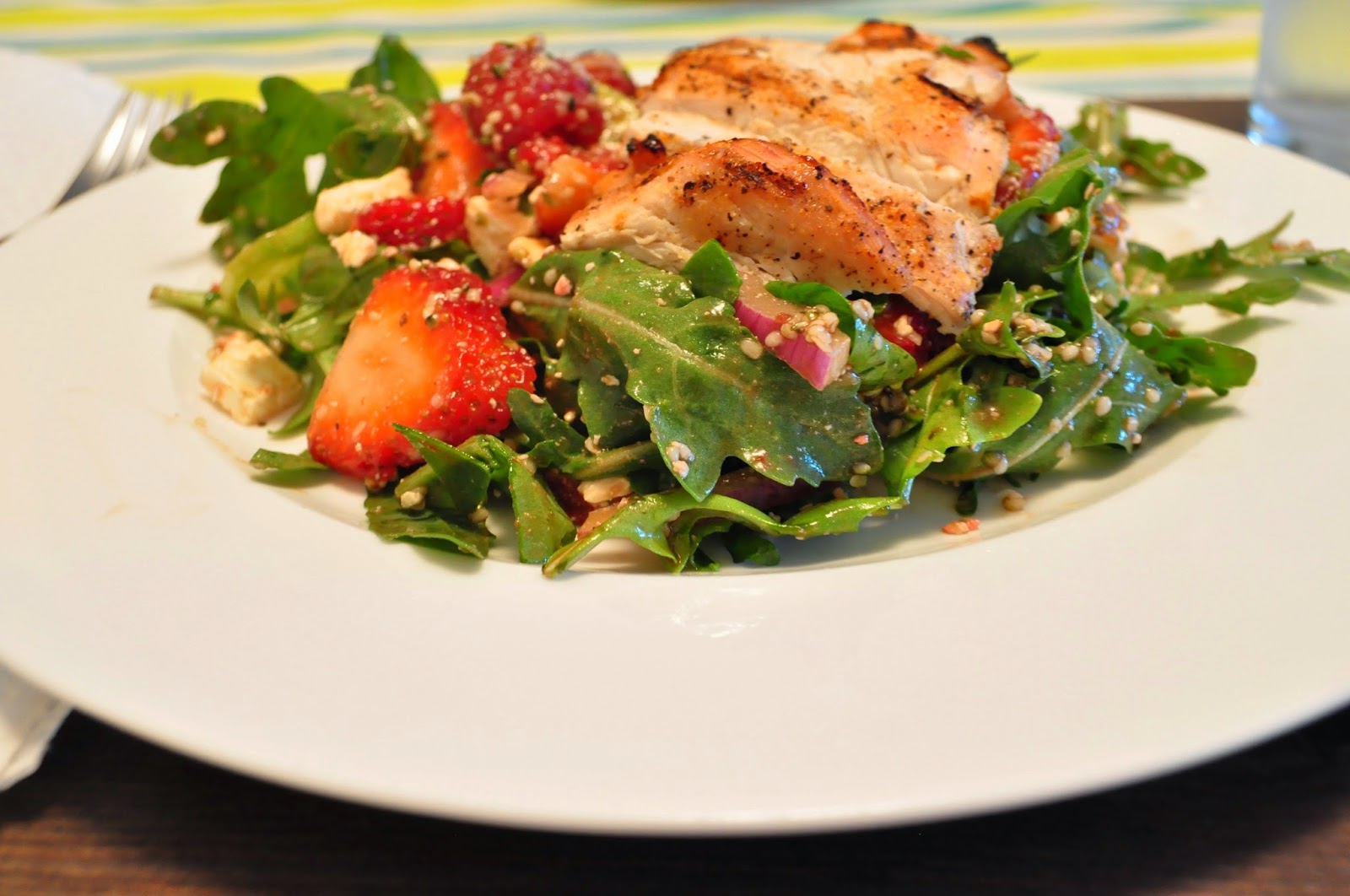 This salad was to die for! If you had some blueberries or blackberries they would be fantastic too.
I really love summer!