I don’t eat at Boston Pizza very often, but when I do I always get the Cactus Cut Potatoes. They are crispy and spicy and they come with the most amazing dip. My brother in law found a copycat recipe online for the dip so I gave it a whirl. 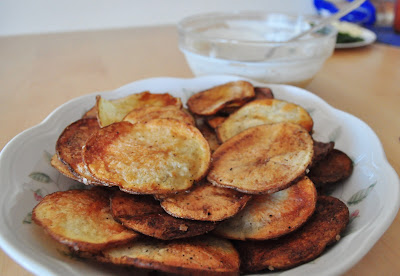 It is perfect!! This dip is to die for; it tastes just like the stuff at BP!
I decided to bake my potatoes instead of frying them, just to cut the fat a wee bit. 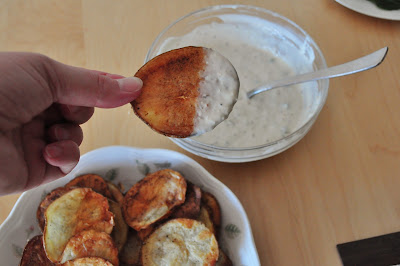 In a medium bowl mix together the sour cream, Caesar dressing, Parmesan cheese, green onion and chili flakes.
Refrigerate for at least 2 hours to let the flavours come together.

Preheat your oven to 400 degrees.  Grease 2 baking sheets.
Toss the sliced potatoes with the olive oil and salt and pepper to taste.
Lay out the slices on the baking sheets in a single layer leaving a little space between each slice.
Bake for 8-10 minutes on the first side, until golden, then flip and cook another 8-10 minutes until golden on the second side. I got mine a little crispier than I should have so watch them close.

Serve hot with the dip. 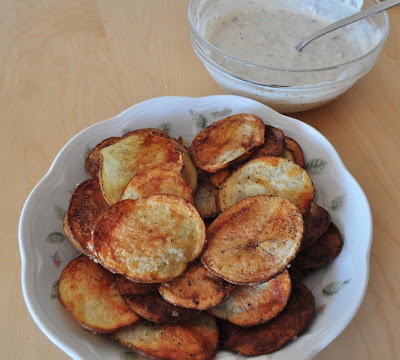 Thank you Ryan, for finding this recipe, it is so good.
I know I am going to be making it WAY too often.